Third Hastings of Malawi album (The Xmas Album) - a 38 minute poem. Available on the SubRosa label. 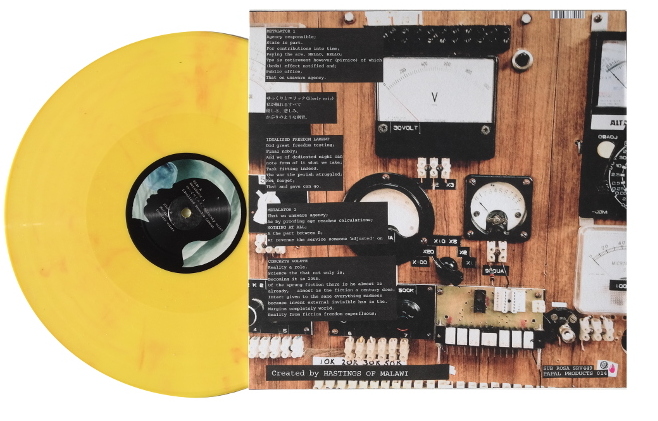 Second Hastings of Malawi album - a 40 minute radio play. Released in 2018 on the Belgian SubRosa label on yellow vinyl. Available from SubRosa

...two extended audio collages, establishing an impenetrable and surreal atmosphere with the use of manipulated field recordings and found sound. ..... a glitchy answering message, cracked organ tapes, etc. They’re damaged, dusty, and absolute gold in the hands of these skillful sound sculptors.... The two tracks are disjointed, confusing, and utterly terrifying, but undeniably convey a detailed abstract story. - jckmd noisenotmusic

...the human voice is distorted into absolute ruin, producing incoherent mumbles and inhuman groans ...layered artefacts from old 78s and discs and decaying tapes combine to produce audio textures that are almost aesthetically satisfying, if one could only ignore the unfolding nightmare they depict. ...The horrifying intensity of these grooves – near the end of side B – cannot be overstated! ...continued theme of communication failure ...many listening moments which are guaranteed to short-circuit common sense. ... I suppose Visceral Underskinnings could easily be read as a “noise” record, which would tend to align it with the history of industrial music and related enterprises, but I would prefer to see it as a text; an audio text where every sound has been selected, arranged, treated and sequenced with considerable care. You can dig out more and more from this text every time you spin it, and there’s enough information here for scholars to go mad as they try and process it.... very highly recommended. - The Sound Projector

The inclusion of the word ‘visceral’ in the title of Visceral Underskinnings is apt. This two-track, forty-minute record toes the line between music and sound art as well as incorporating blasts of pure noise. Machines malfunction, strange voices chant, seasick computer melodies ghost in and out of the mix, and structurally the sides have plenty in common with the surreal collage of the album’s artwork. It’s a challenging record, but persevere and you’ll realise that Hastings Of Malawi have given us a Dadaist masterpiece. - Bleep.com 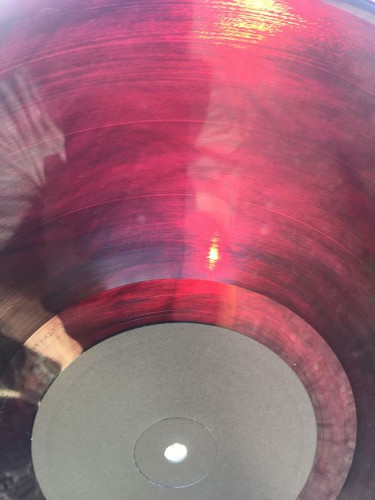 Nihil Unbound is one of the most unsettling albums I have. Given that John Grieve’s primary listed instrument is a tenor saxophone, such a statement sounds incredulous. Yet this is menacing. Animal, dark violence soaks this black vinyl. Hold it up to the light, and a glimmer of deep red leaks through.....The sound is a smart intersection of digital, analogue, acoustic and instrument sources. There is bashing about but almost as if happening haphazardly around you. This melds with other, more immediate sounds and provides a truly uninviting structural ambience....Much of what might be mistaken for synthesizer underlayment is, I believe, processed and manipulated low saxophone notes. Noise saturates. Voices growl intermittently. Whatever slight tweak, processing, or recording acumen used turns them truly demonic. 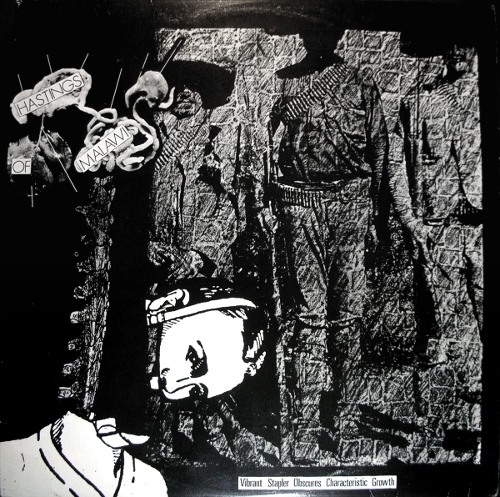 1981 "classic masterpiece" album by the "legendary" Hastings of Malawi who were John Grieve, David Hodes and Heman Pathak.

The album was released in 1981 as Vibrant Stapler Obscures Characteristic Growth by Hastings of Malawi on the Papal Products label.

Reissued in 2017 on the Belgian SubRosa label on red vinyl, just like the original pressing and then again on gold/black vinyl. Described as dada, underground, post-industrial, concrete music, DIY, punk. Available from SubRosa

Features Pat Simmons who was the voice of the UK speaking clock between 1963 and 1984.

...a heavily beguiling session of dadaist lo-fi concrète, coruscating haywire synths, the speaking clock and lots of acousmatic clangour ...Strikingly future-proofed by way of its outlandish, disclocated temporality and punkish disregard for convention, - untrammelled, explorative madness. ...one of the wildest records you’ve never heard before. - Boomkat

extract released on paradigm discs in 1999.